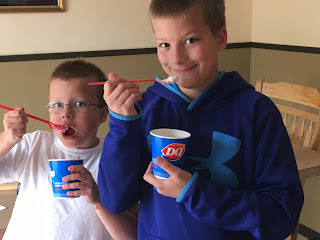 Last hurrah before school officially starts
(oops...this picture is from a month ago).
BAP is going into 6th grade.
SSP will be a 3rd grader.

Will time ever slow down?!
Posted by Lovey Dove at 5:45 PM No comments:

Email ThisBlogThis!Share to TwitterShare to FacebookShare to Pinterest
Labels: Life

Happy Easter! May God richly bless you during this special holy season and always.  Today we celebrate, after 40 days of fasting, prayers and alms giving, the richness of Christ's Resurrection. 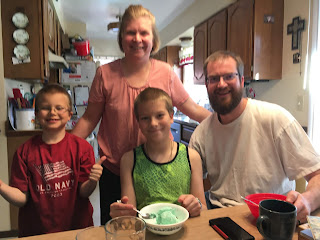 Email ThisBlogThis!Share to TwitterShare to FacebookShare to Pinterest
Labels: Life

Growing up every year on Good Friday we would make Hot Cross Buns.  Since getting married and raising my own family I have done the same thing. It is such a fun tradition. BAP and SSP love the excitement of seeing little rolls with frosting crosses pop out of the oven. This year I tried a new recipe.  They did not look so pretty (so no picture) but they were delicious; we all loved them.  If you have every watched the show "The Great British Bake-Off" you would recognize the familiar name of Paul Hollywood.  This recipe is his...delicious.

Mix together in a large mixing bowl the dough ingredients; fold in apple raisin mixture.  Let rest covered and rise until doubled. Shape into 12 rolls.  Place on parchment paper. Let rise again. While rising this second time preheat oven to 425. Next pipe on crosses. Bake 20 minutes.  When rolls are still warm brush on the melted marmalade. Let cool slightly and enjoy.
Posted by Lovey Dove at 3:04 PM No comments:

Our Lady of Czestochowa

A Little About Me

Lovey Dove
One calls me Lovey Dove, Others call me Mommy, & Others by my name. I am a Roman Catholic Stay at home Mama; I enjoy living the Liturgical Year. We pick an extra special meal for Birthdays, Baptismal Days, and Feast Days.

Polish legend has it that the bright warmth of the sun must shine upon the earth on Saturday, if only for a brief moment, in remembrance of Christ's infancy when on that day Mary would wash immaculately clean his swaddling clothes so that Sunday might find delight in witnessing the baby God in pure and fresh-scented dress.

Where I Frequently Visit